A farmer struggles with his conscience every time he takes his cows to the slaughterhouse. He knows he must make a change.

It tells the story of an unlikely friendship between a hungry Polar bear, Nanuk, and an enthusiastic grizzly bear, Aklak. 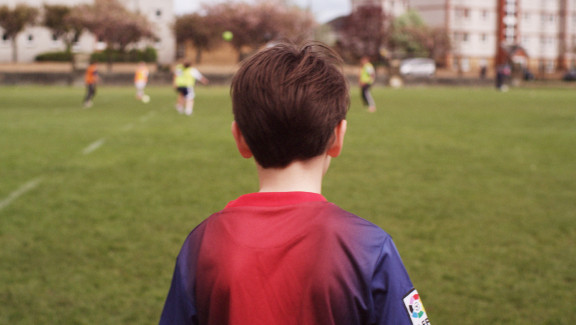 A non-conforming 8-year-old challenges gender expectations when forced to make an Easter Bonnet with the girls. Bravely subverting convention, he also learns that the grown-up world is not quite so black and white.

The Missing Scarf
Eoin Duffy
Irlanda.
2013.
Animación
6'
A black comedy exploring some of life's common fears: fear of the unknown, of failure, rejection and finally the fear of death.

'Violet' is the haunting, cautionary tale of a young girl who despises her reflection.

David, a 17 year old boy who lives in a difficult environment, has an opportunity to achieve his dream.

From the opposite building, two girlfriends are spying on 'the Legend', the most handsome guy in the neighbourhood. One of them is getting ready: tonight, she knows it, she's going to spend the night with him. Her first night of love.

A teenage girl is staring at herself in a mirror. She doesn't like what she sees; fat, skinny, ugly, she looks like a monster. Maybe she should just take a step back and realize she's not that monstrous.

The death of Roberto, the canary, forces a family to come to terms with their own grief.

I was small, but I remember it very well. Mom and Dad suspected nothing, but I knew straight away. The thing in the cot, was not my brother. It was you! You had that strange face and you stank... Right, Tadpole?

Romanian trucker Stancu has given his nephew Dragan a second driver card that enables him to stretch his legal driving time. But when Dragan almost causes an accident due to microsleep at the wheel, Stancu feels all of a sudden responsible.

Life in the Munich suburb Neuperlach is tranquil. It's a safe neighbourhood, people greet each other and everything is nicely groomed. However, this peaceful existence has been troubled for some time now - refugees are set to move in next door. As some of the residents are afraid of the expected disturbance, a noise barrier is being put up.

As a child, Carlotta didn’t expect the people around here to have faces. She even doesn’t recognize her own face. Years later, she learns about a rare, untreatable deficit of her brain. It was art, after all, that offered her a way to finally recognize herself.

The film uses animated objects discovered in the family archives to recount the life of the director's mother. It's a 20th century biography: growing up in the Nazi era, teenage years in post-war Germany, the building of the Wall and life in the GDR and then reunified Germany.

Little Jiro feels sick. His father takes him to see the doctor. She diagnoses a harmless condition, but it shakes the core of the boy's identity.

Pep, 13, is completely in love with a girl from his grandparents' town, Sara Amat. One summer night Sara disappears without a trace. Few hours later, Pep finds her hidden in her room. The young woman explains that she has run away from home and asks to stay with him. Although Pep knows that the entire town is looking for her, he agrees and becomes her protector and accomplice during the last days before they leave the town. The boy is forced to live a double life: he has to lie to everyone and he must also satisfy Sara's requests, which will put him to the test and make him mature suddenly before the end of summer.

Sara (Greta Fernández) has been alone all her life. She is 22 years old, has a baby and wants to start a normal family life with her little brother and the father of her son. Her father, Manuel (Eduard Fernández), after years of absence and upon leaving prison, decides to reappear in their lives. Sara knows that he is the main obstacle in her plans and makes a difficult decision: to push him away from her and her brother.

Thirty Souls
Diana Toucedo
España.
2018.
Documental
80'
In a small village in Galicia in the Sierra de O Courel (Lugo) its people live with the direct envy of nature, the harsh winter, depopulation and oblivion but also with a very strong belief: death is not an end but a transition In the middle of these hypnotic places, Alba appears, a thirteen-year-old girl who wants to discover the unknown, mysterious and fascinating part of death, which, like many other teenagers, wants to understand what surrounds her but that is not revealed in an obvious way. Together with his best friend, Samuel, he enters abandoned houses, travels through destroyed villages and enters into mountains that hide perhaps another parallel world.
Wednesday 13
21:00
El dedo en la llaga
79 min

Resting on the table is the map of my last trip to the Svalbard archipelago, at the North Pole. That map, crumpled and broken, has become a form of mental cartography, a territory of painting and drawing, a new and exciting space for the imagination.

This film reflects on human relations with the natural environment and analyzes the future of the species within a context of geographical chaos.

On September 20, 2017, an event revealed an uncomfortable reality in Puerto Rico. Capitalist politics had left the island defenseless against climate change and the first climate refugees emerge.

Carlos is a human being who at this very moment is on a holiday in Antarctica. The penguins, who do not have cameras, will forget all about Carlos.

A Mongolian miner takes his sick daughter away from the heavily polluted city to see the shaman. Upon finding a new home with the reindeer herders in the forest, he learns that this world too, is changing.