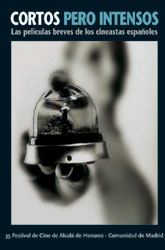 The short films of the Spanish cineastes

The short film, a clear example of survival under precarious conditions, constitutes a fundamental part of every cinematography. Spain is no exception here and the country's short duration films have not only been the refuge for new directors who want to enter the cinematographic industry. The short film has also provided an open space to which consolidated cineastes have returned in different moments of their career. Despite its low profitability, the few screening possibilities, the disapproval that the media have shown towards it, the short film nevertheless still exists and presents itself in good shape.

Short(s) but intense tries to analyze these approaches to the short film via some of our most acknowledged directors. Without claiming to be definite, the book constitutes a step ahead in the acquaintance with the directors' little or even unknown facet. A facet that presents the fundaments of their style. A facet that allowed a development of their work with greatest liberty. A facet that demonstrated the directors' thematic preoccupations for the first time.

As Fernando Lara puts it in the prologue, "It is sufficient to see the list of Spanish cineastes on these pages to understand that the short film was crucial for those who did their first steps in the seventh art and to understand that those films (short in their duration but not small in their impact) form an indissoluble part of an creative "corpus" that one has to contemplate in its integrity."

Among the 39 directors which appear here, some are already dead. Yet, many others are quite active - including some whose more than promising careers have just started with the intention to show the most ample and varying repertoire possible. We can follow a subterranean history of the Spanish cinema via the short films of Buñuel, Berlanga, Bardem, Saura, Trueba or Amenábar - just to mention some of the mayor names in the history of our cinema.
DESCARGAR
LEER